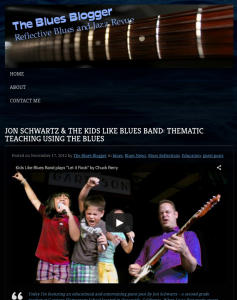 Today I’m featuring an educational and entertaining guest post by Jon Schwartz – a second grade teacher at Garrison Elementary School located in Oceanside, California. When I was first made aware of Jon’s teaching endeavors, I was moved by his efforts in utilizing the blues as a vehicle for education and entertainment with his students.

I immediately touched base with Jon and we ended up having a terrific discussion over the phone. When speaking with him I could feel the energy, creativity and dedication to his students in his voice. During the conversation Jon mentioned that his Kids Like Blues Band spontaneously began when a gifted student started dancing to the first blues song he brought to the class. A bunch of other girls would then join along; amazingly included in this small group were his non-English speaking students from Japan and Mexico. It ultimately became a full class effort with the boys as well. A band was then quickly formed to play at the school talent show. You can follow this link to their first performance featuring the song “Sweet Home Chicago”.