These First Graders Got The Blues 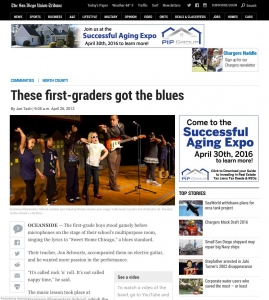 The first-grade boys stood gamely before microphones on the stage of their school’s multipurpose room, singing the lyrics to “Sweet Home Chicago,” a blues standard. Their teacher, Jon Schwartz, accompanied them on electric guitar, and he wanted more passion in the performance.

The music lesson took place at Garrison Elementary School, which the Oceanside Unified School District has designated as a visual and performing arts campus. Schwartz and his students have formed a first-grade blues band, which has performed at the school’s talent show and at the city’s Thursday night Sunset Market on Pier View Way.

Original article can be found here.