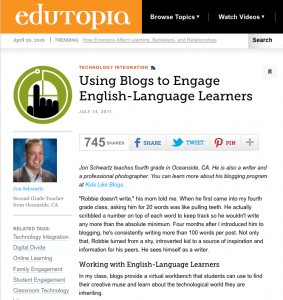 “Robbie doesn’t write,” his mom told me. When he first came into my fourth grade class, asking him for 20 words was like pulling teeth. He actually scribbled a number on top of each word to keep track so he wouldn’t write any more than the absolute minimum. Four months after I introduced him to blogging, he’s consistently writing more than 100 words per post. Not only that, Robbie turned from a shy, introverted kid to a source of inspiration and information for his peers. He sees himself as a writer.

In my class, blogs provide a virtual workbench that students can use to find their creative muse and learn about the technological world they are inheriting.

This year I had a 36-member, fourth/fifth-grade combination class. Twenty three students came from households where English was the second language, or wasn’t spoken at all. Most of their parents had a high school education or less, spoke little or no English, worked long hours, and were able to provide limited academic support.